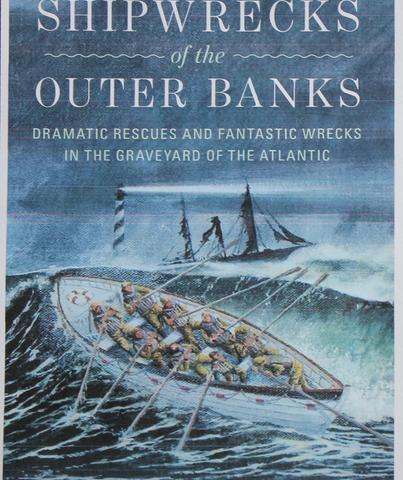 Outer Banks: Graveyard of the Atlantic, Overlook Horizon video with me as one of the consultants. Also, a great plug for my new book (above). https://www.youtube.com/watch?v=Mn8PnNGf_2Q

More than 6,000 ships have met their doom in the waters along the North Carolina coast, weaving a rich history of tragedy, drama and heroics along these picturesque beaches. Men have lost their lives and fortunes, and heroes have been made where the combination of mixing currents, treacherous coastline and shifting underwater sandbars spells disaster for even the most seasoned sailor. These are the stories of daring rescues, tragic failures, enduring mysteries, buried treasure, and fascinating legend.

James brings to life the U.S. Life-Saving Service: the heroes and shipwreck rescues activity off the North Carolina Outer Banks coast. The stories based on official records of extraordinary rich history of tragedy of the 3,000 ships that have met their doom in the waters along the North Carolina coast. The stories behind the shipwrecks illustrate the best and worst of mankind, showing courage and compassion.--Doug Stover, Retired Historian of Cape Hatteras National Seashore

I thoroughly enjoyed this book. It showed me that, as much as I thought I knew about the history of the Outer Banks, there is a lot more that I didn't know. James Charlet has written an extraordinary account of the shipwrecks along the Outer Banks. From the earliest settlers through Blackbeard, colonial America and into the 21st century, he has captured the essence of why the Outer Banks is known as the Graveyard of the Atlantic.--Chris Wright, BMCM, USCG (ret); Surfman 309

James Charlet is one of America's finest storytellers today. With experience as a historian, manager of the Chicamacomico Life-Saving Station, and a lifelong student of maritime legends, there is no better subject for him than the true stories of nightmarish shipwrecks along the notoriously dangerous North Carolina Coast. Shipwrecks of the Outer Banks offers in-depth looks at some of the most famous shipwrecks to date and what caused them. He puts the reader right there on board the distressed ship or in the life-saving surfboat with the angels in oil coats struggling to rescue their fellow mariners. Well illustrated and peppered with fascinating behind-the-scenes explanations, this book is hard to put down.--Cheryl Shelton-Roberts

If you have ever experienced James Charlet relating the history of the U.S. Life-Saving Service and tales of heroic rescues by the Chicamacomico Station, you know you are in for a treat. I have watched as James held his audiences spellbound, from small children to older adults, and this book does not disappoint. He does a masterful job weaving the history of the U.S. Life-Saving Service (now the U.S. Coast Guard), explaining why the Outer Banks of North Carolina are the "Graveyard of the Atlantic," and recounting seemingly impossible rescues of passengers and crews of unfortunate ships foundering off the coast. In addition, the author explains nautical terms to landlubbers so that we can better appreciate and understand what actually happened. He also relates how certain wrecks impacted the history of the United States, such as the loss of the SS Central America adversely affecting the fragile economy and political climate of the time. James Charlet has written a masterpiece that not only preserves the heroism of the brave surfmen of the U.S. Life-Saving Stations but reveals little-known maritime history. A MUST read for all persons serving in the U.S. Coast Guard!--Martha Jackson, Chief Curator, Division of State Historic Sites and Properties, NC Dept. of Natural and Cultural Resources

Along North Carolina's coastline is a land barrier known as the Outer Banks. For many years people who have lived there pursued the dangerous profession of commercial fishing. Others flock to the Outer Banks to enjoy the beautiful beaches. There is great beauty on the Outer Banks, but sailors know the other reputation of the region: "The Graveyard of the Atlantic." The sea floor on and near the Banks are strewn with shipwrecks along with hundreds of deaths. All of this eventually led the United States government to seek ways to try to stop the carnage. One of the ways would eventually become the U.S. Coast Guard. The history of the Banks is replete with tales of heroism, and death. James D. Charlet has gathered a very good selection of some of these events. Those who are interested in the sea and dramatic sea rescues will find much of interest in Shipwrecks of the Outer Banks: Dramatic Rescues and Fantastic Wrecks in the Graveyard of the Atlantic.--Dennis L. Noble

Keeper James methodically reveals his passion about the Lifesaving Service. I was amazed by his knowledge on this important piece of American History, and his diligent attention to the details. The 1918 rescue of the SS Mirlo's crew in Chapter 3 stirred my excitement and almost brought me to tears. Such heroics exceed my imagination. Hat's off to a master storyteller! This history deserves to be told and retold. America is in need of heroes to spur each of us to go above and beyond what we think we can accomplish. These ordinary men from the Outer Banks of North Carolina performed superhuman feats of courage, exemplifying the true meaning of the "golden rule." I would like to have known some of them on a personal level, across the table over a cup of hot coffee on a cold and windy day. They are simply inspiring!--Lewis C. Forrest, Chair, The Friends of the Outer Banks History Center

James D. Charlet leads tours, educational programs, and speaking engagements and contributes to local and national media with articles on Outer Banks and nautical history. James taught North Carolina history for 24 years and worked with the Wright Brothers National Memorial. He has been involved with the Chicamacomico Life-Saving Station Historic Site & Museum for the past 21 years and was the Site Manager of the Historic Site for 10 years.

Wreck & Rescue: The Journal of the U.S. Life-Saving Service Heritage Association, Winter 2017, Volume 17, Number 4, pp. 11-13, “Shipwrecks and Rescues of the Outer Banks Series – The Wreck of the Huron.”  No link available.

The Island Breeze magazine, November 2016, “Shipwrecks and Rescues of the Outer Banks: The Ephraim Williams and Motto Maker of Cape Hatteras.

“Lifesaving Traditions of the Outer Banks, Part I”

Rasmus Midgett and the Single-Handed rescue of the Priscilla.”

My description of “Pryor House” that our family lived in from 1960-1962, East Hanney, Oxfordshire, England.